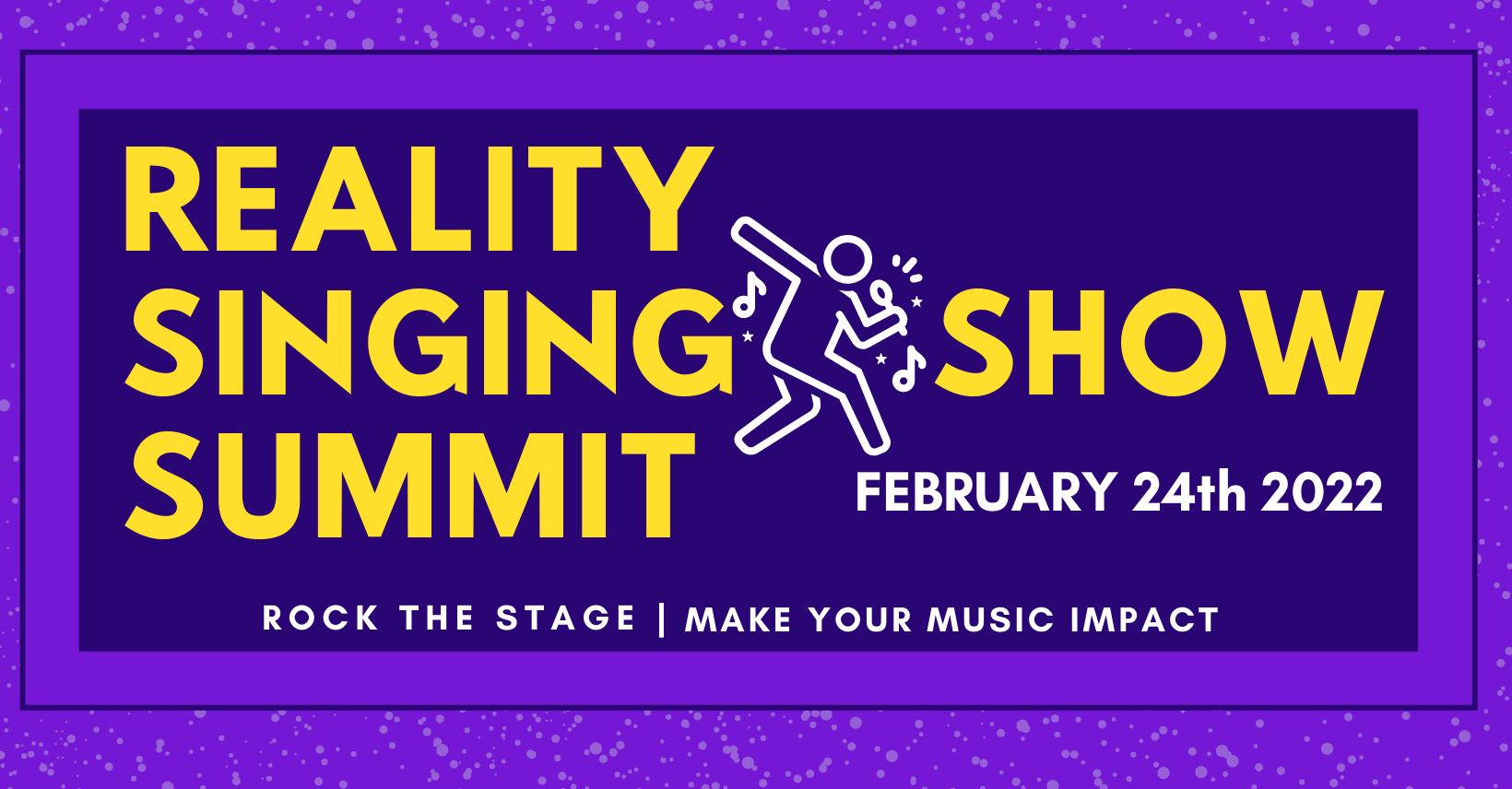 Learn from Reality Singing Show Insiders & Top Music Industry Experts on how to position yourself for the best chance at success on a reality singing show!

This ONE OF A KIND, IMPACTFUL, FREE 1-day virtual conference, features Reality Singing Show Insiders and top music industry experts who will shine a light on all the areas that will help singers and performing artists prepare for and maximize their reality singing show experience.

This is the ONLY conference dedicated to positioning you for success on a Reality Singing Show and supporting you with strategies to prepare with confidence.  When you attend this Summit, you'll be empowered to slay your audition and leverage the reality singing show platform to create future music career opportunities.

WHO WILL BE THERE?

From the Head Vocal Coach of Britains Got Talent and X Factor UK, to Casting Producers, Music Industry Consultants, Artist Managers, and Past Reality Singing Show Contestants, each Speaker inside this Summit will equip attendees with the knowledge they need to successfully prepare and leverage the reality singing show platform to create momentum in their music career.

WHY ELSE SHOULD I ATTEND?

Network and connect with other artists, while getting an opportunity to ask your questions LIVE inside each Featured Speaker Session,  through the LIVE Q&A format.  Attendees will also be given opportunities to win prizes in our Summit Giveaways and your chances increase with every LIVE session you attend.

TICKET PRICING:
GET EARLY BIRD PRICING ON VIP ACCESS UNTIL 2/20 ONLY 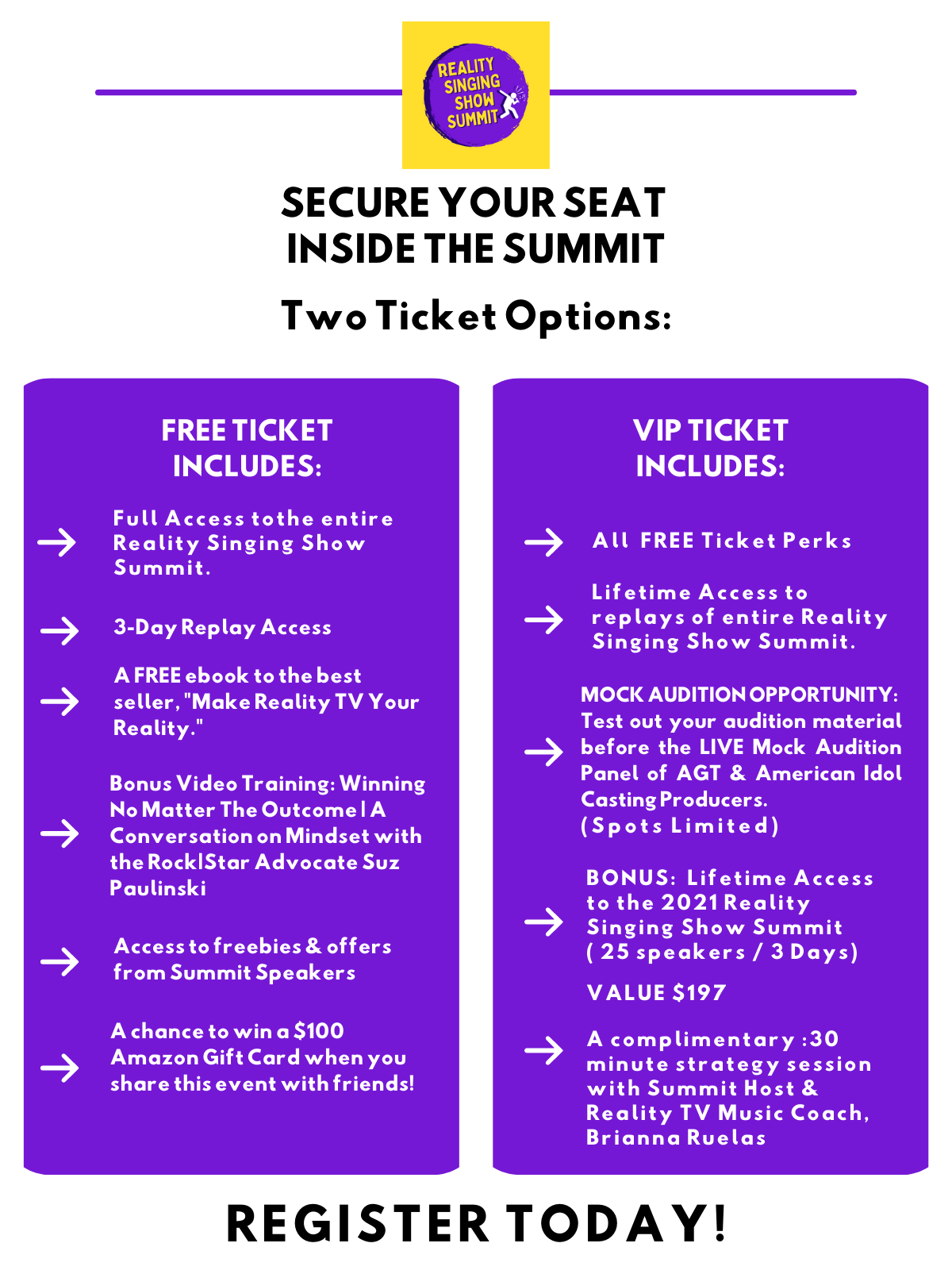 “The past few days was a whirlwind of knowledge from a wide range of speakers that cover the whole spectrum of the entertainment business. Not only were they knowledgeable, but every speaker was kind, supportive and engaged with us in a way that is very hard to find. I'm so grateful I took part and came away with a wealth of info to put in to action and a lot of new people to add to my network.” 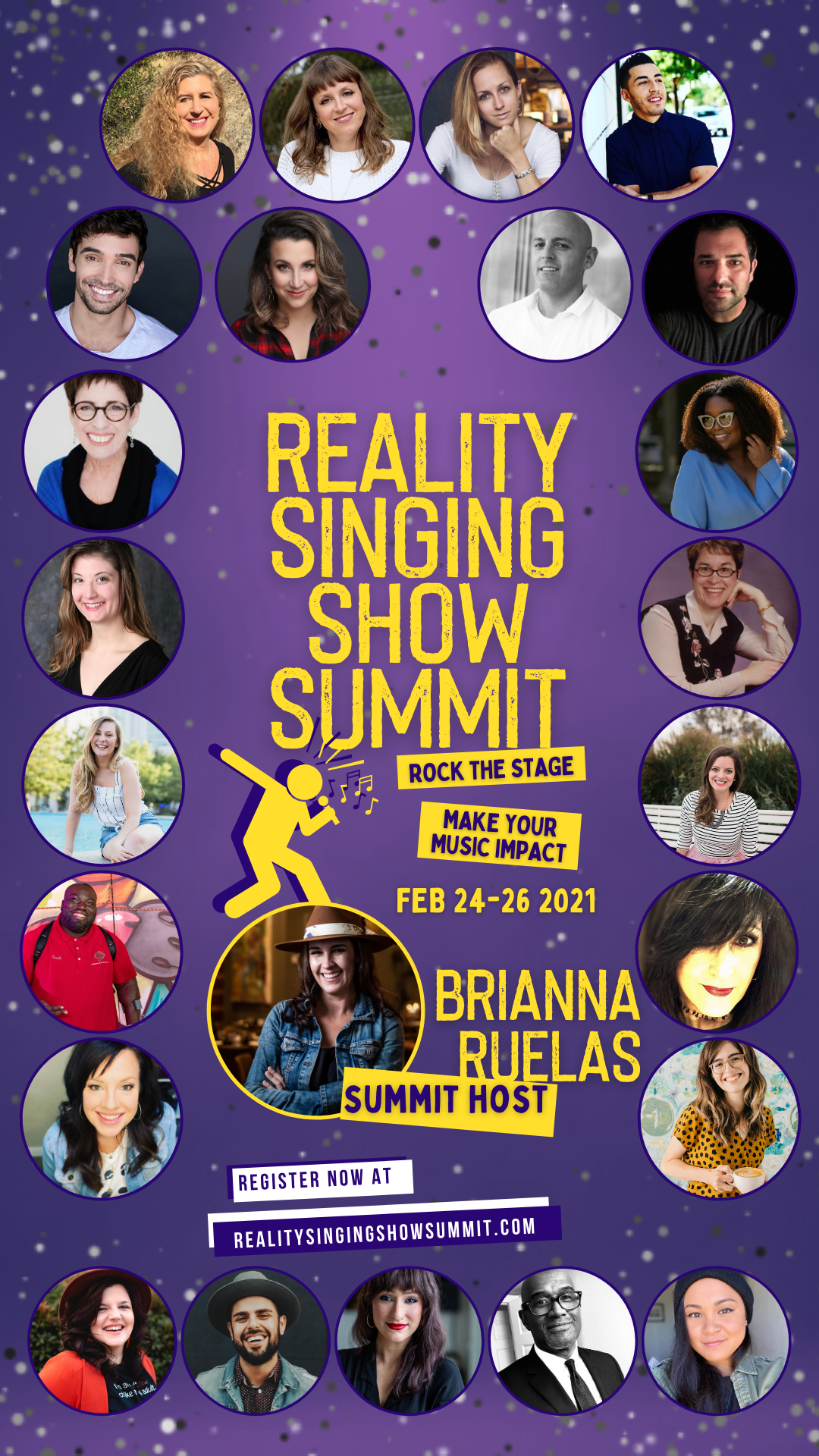 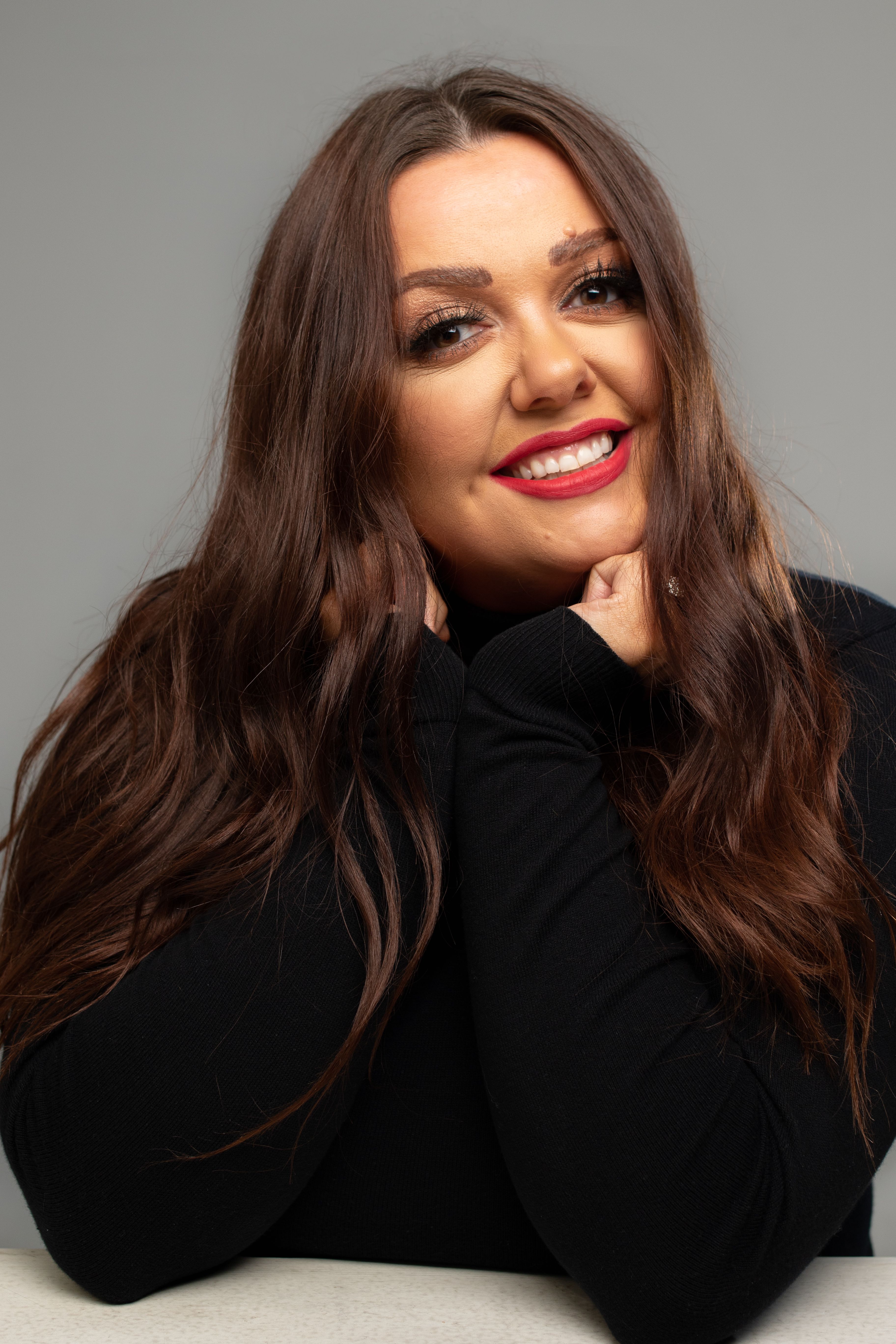 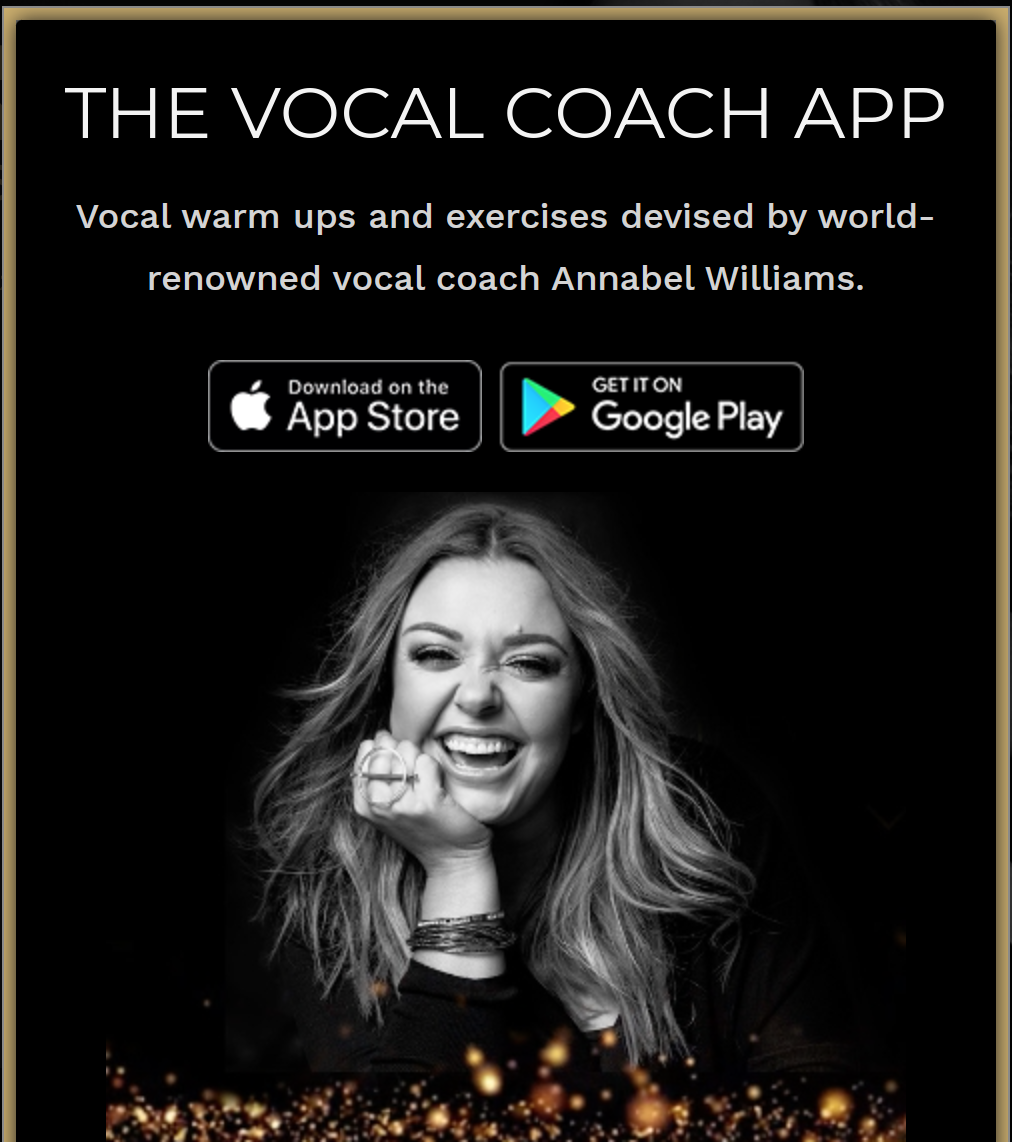 We are So Excited For Our Featured Guest Speakers 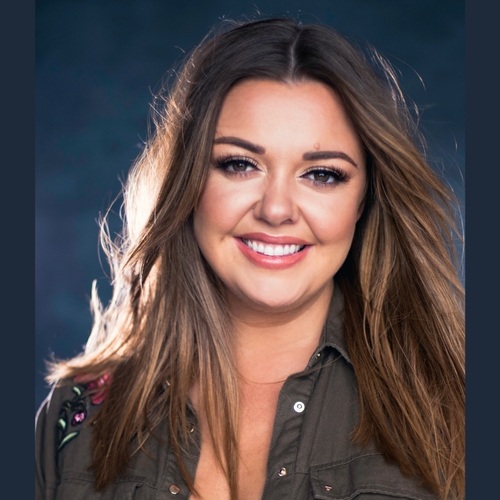 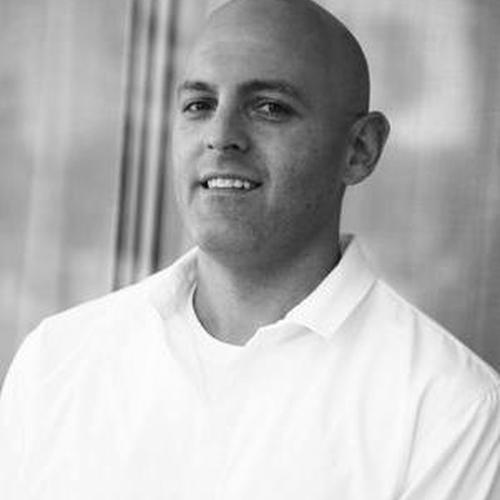 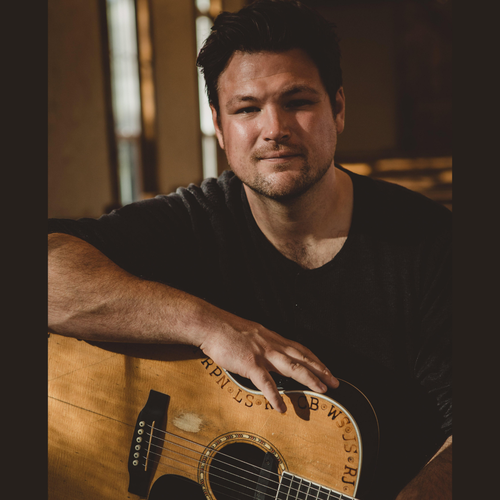 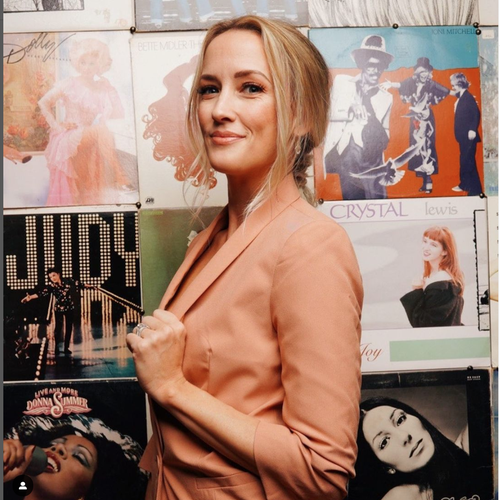 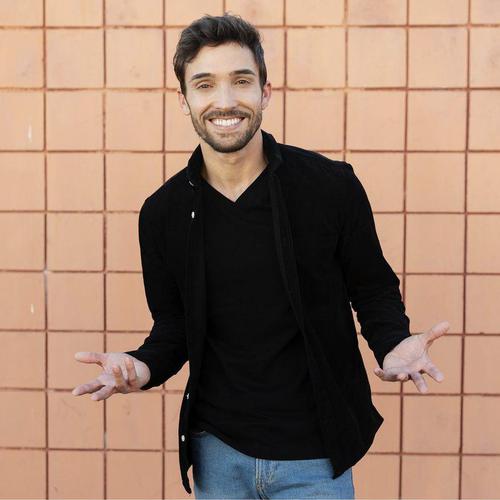 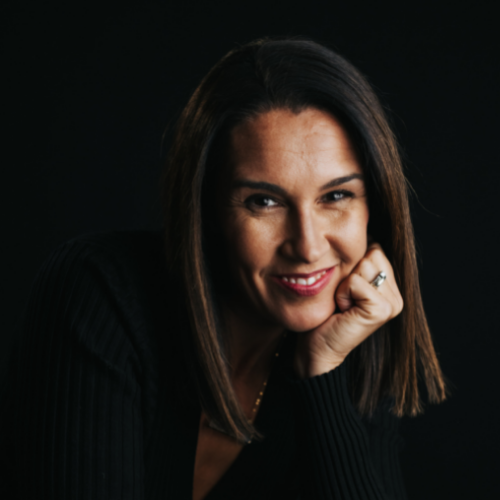 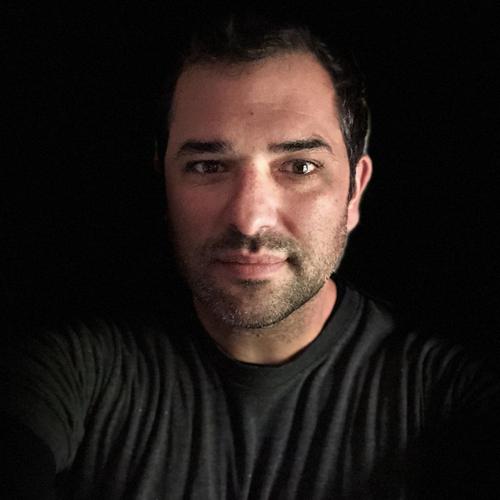 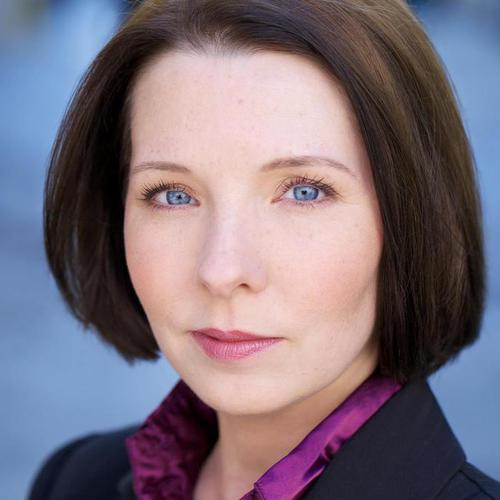 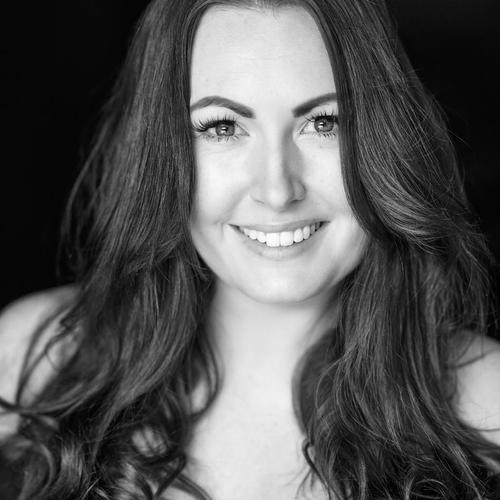 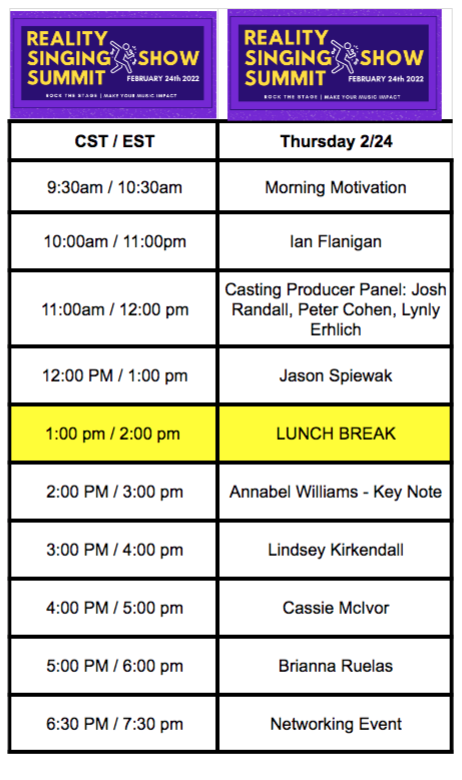 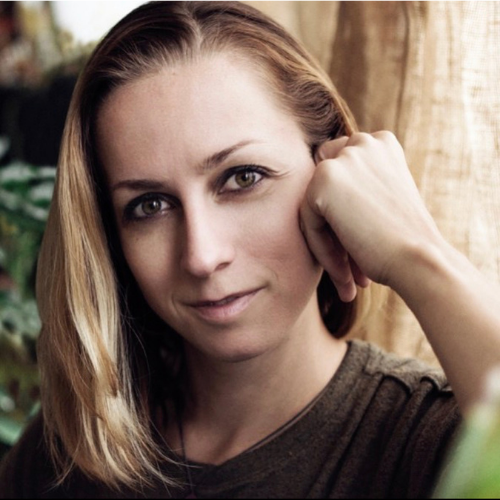 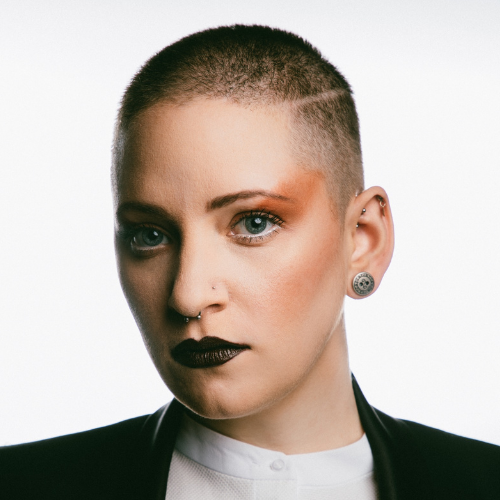 BONUS TRAINING WITH YOUR
SUMMIT TICKET!

"Winning No Matter The Outcome"

BONUS TRAINING WITH YOUR
SUMMIT TICKET!

All the insider tips you need to slay your reality singing show experience,

Your ticket inside the Summit includes access to music industry experts and past reality singing show contestants, who will be sharing their years of knowledge, experience, and strategies, to support you on your music journey.

If you're serious about a career in music and you want to make reality singing shows part of the plan, the Reality Singing Show Summit has you covered. 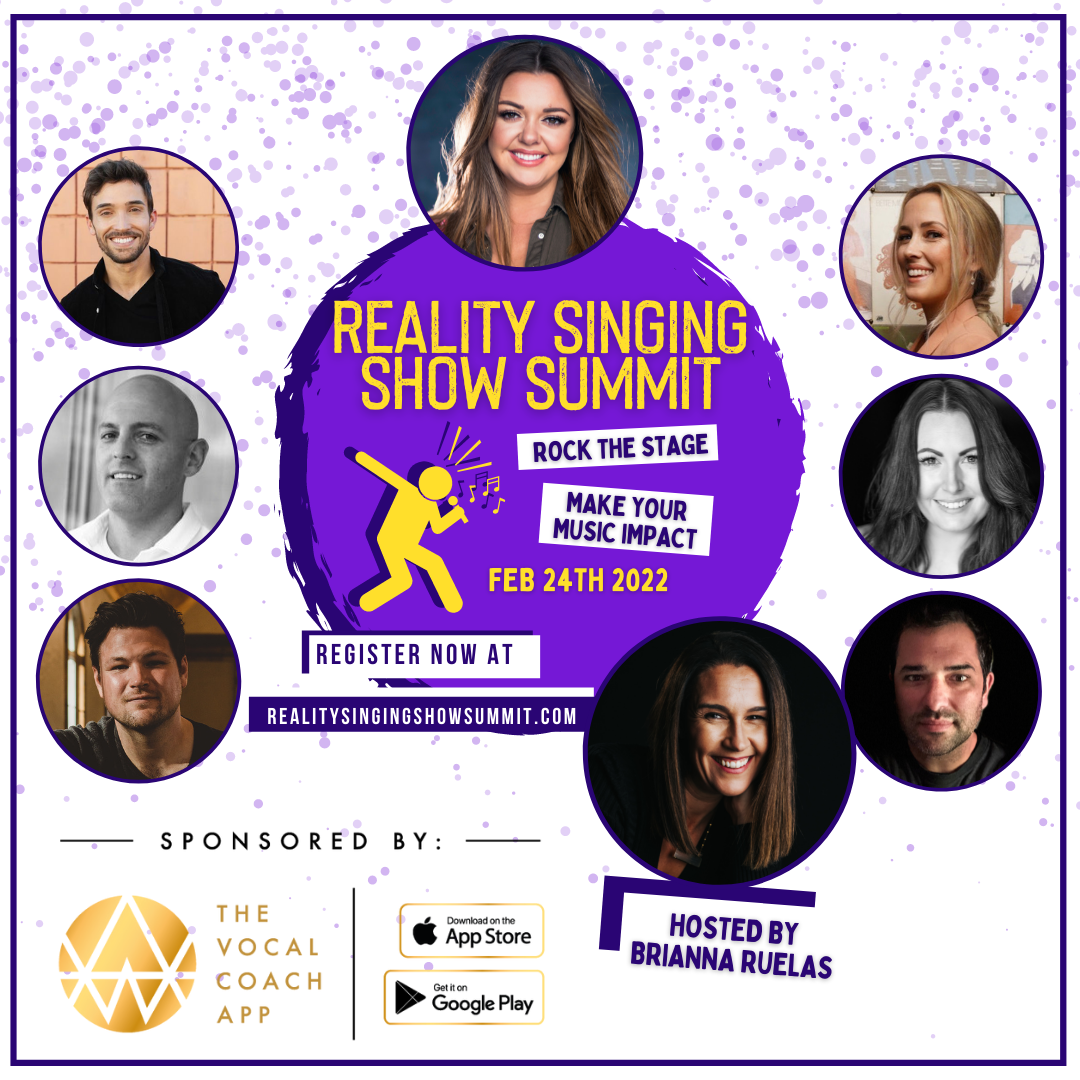 Finally! A one-stop-shop, to help you prepare strategically for your reality singing show experience.

Achieving success on a Reality Singing Show requires more than a great voice, and this Summit delivered entirely online, will equip you with the knowledge you need to slay your audition, create memorable performances, and fuel you with momentum for your music career.

Get full access to the entire conference, including 3-Day replay access when you register for FREE, or gift yourself with lifetime access to replays, the entire 3-day 2021 Summit Bonus, Countless FREEBIES and a chance to audition LIVE before Reality Show Casting Producers when you purchase your VIP TICKET.

Get ready to transform your reality singing show experience and ultimately your entire music career!

CLICK THE LINK BELOW FOR WHAT TO EXPECT INSIDE THE SUMMIT! 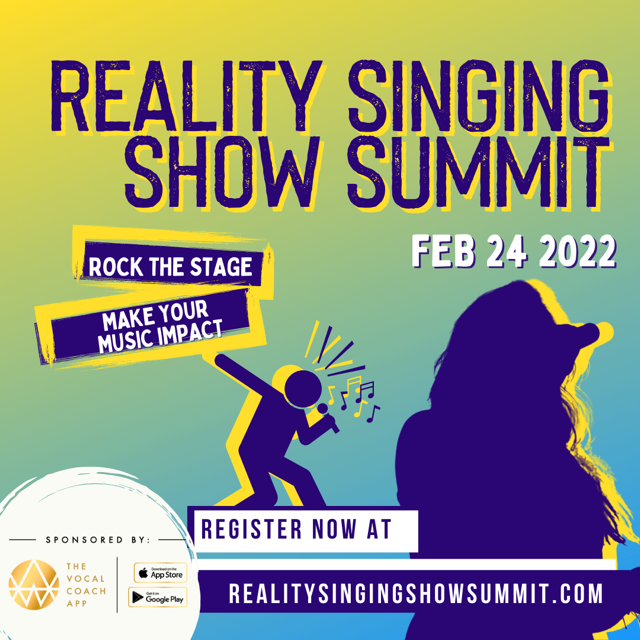 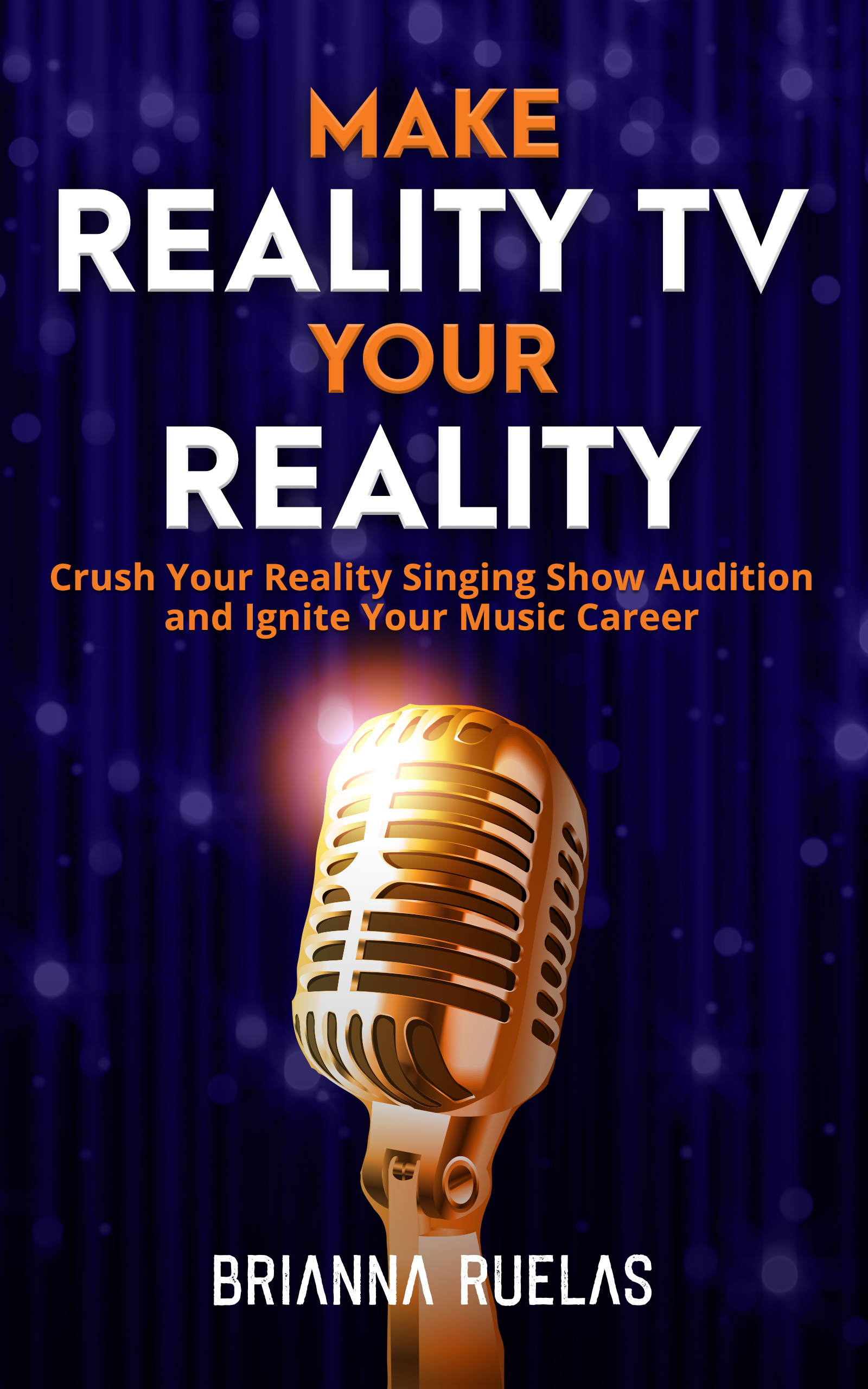 Get a FREE ebook to the best-seller, "Make Reality TV Your Reality" when you secure your FREE TICKET!

“This is a book I wish I could’ve read prior to my run on America’s Got Talent.” — Cas Haley, Singer-Songwriter-Guitarist, AGT Season 2 Runner Up

“Brianna gave me the confidence and the tools to make it past all the auditions and land a spot on Season 17 of The Voice. This book delivers everything you need to know.”— Jo James, Neo-Soul Singer-Songwriter, Season 17 The Voice 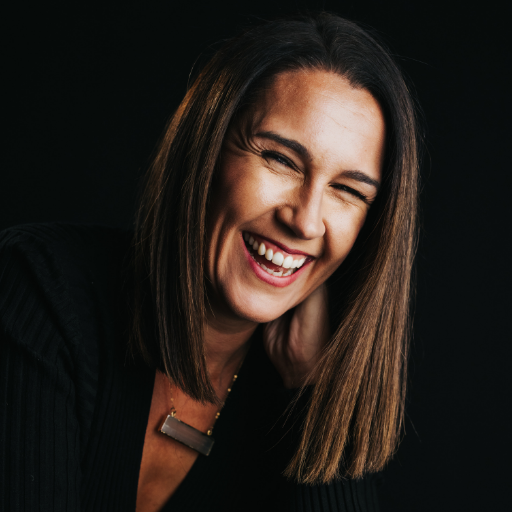 As a singer and performer for thirty years, Brianna has studied internationally and performed all genres, from jazz to rock to pop, received a BA in Theatre Arts from Pepperdine University, and spent years honing her musical theatre chops. After graduating college, Brianna departed from the theatre to pursue music as a solo artist and also worked as a commercial voiceover actor. Brianna has fronted her own rock band and experienced the reality television craze in its early days, as a Top 100 finalist on American Idol, Season 4.

For 7 years, Brianna supported husband and Restaurateur, Victor Hugo with the Behind The Scenes work on their family-owned restaurant, Victor Hugo’s Dining & Bar which became a significant contributor to Brianna’s entrepreneurial journey.

She couples these entrepreneurial strategies with her passion to support her clients as achieve reality singing show & music career success!

Not sure what to watch? Here are some talks you won't want to miss.

Here's What Others Are Saying

We use cookies This website (and some of its third-party tools) use cookies. These are important as they allow us to deliver an exceptional experience whilst browsing the site.